OF KENNEDYS AND CONSPIRACIES

At first glace the answer might seem self-evident – and to a degree it is. But lurking behind the obvious is something fundamentally troubling about the practice of modern journalism.

Today is the 50th anniversary of the assassination of Robert F. Kennedy. He had just won the California Democratic Primary a vital step in his campaign to become President. 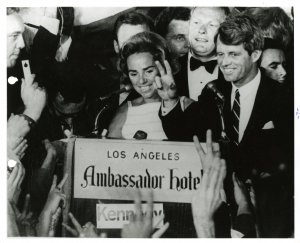 Had he lived it is likely – though not guaranteed– that he would have beaten Richard Nixon in the in November 1968 general election. What is certain is that under a second President Kennedy, the United States would have been a very different country: it would have been spared the scarring scandal of Watergate and his determination to fight social, racial and economic injustice would have begun a long-overdue process of healing the divisions which blighted America then, and do so to this day.

Internationally, too, he promised change: withdrawal from Vietnam rather than Nixon’s escalation of the war (let alone its covert expansion into Laos and Cambodia) was his most immediate commitment, but his speeches throughout Latin America two years earlier made clear that he believed the United States should treat honestly and openly with its neighbours. It seems unlikely that Ronald Reagan’s adventures in Central America – the Iran-Contra scandal was but one of several – would have happened had RFK occupied the Oval Office before him.

For all those reasons, the shooting of Robert Kennedy in a kitchen pantry at the Ambassador Hotel, Los Angeles was a seismic event. It warranted a thorough, honest and open inquiry by Los Angeles Police. It did not get one.  Los Angeles Police mounted only a simulacrum of an investigation and with the DA’s office constructed the criminal equivalent of a Potemkin village – a Hollywood-style set whose façade concealed the truth that evidence was overlooked, destroyed or suppressed, and witnesses were ignored or intimidated into silence. After which they locked the whole sorry saga away, hiding their mis-deeds and incompetence behind impenetrable walls of official secrecy for two full decades.

Independently and then in tandem, I and former CNN journalist Brad Johnson, have spent more than 25 years investigating the RFK assassination. I made a one hour documentary about for Channel 4 in 1992 (viewable on the films pages of this website), and Brad produced a film for the Discovery Times channel in 2007. Last week our book on the case – The Assassination of Robert F. Kennedy: Crime, Conspiracy and Cover-Up – was released; it was accompanied by a substantial serialization – five full pages over two separate days – in the Daily Mail. 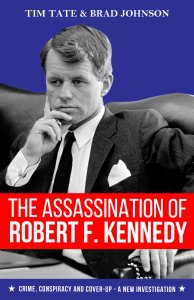 The book, and our films before it, presented clear evidence that the man convicted of murdering Robert Kennedy – Sirhan Sirhan was arrested in the pantry with a smoking gun – could not have done so. The autopsy revealed that Kennedy was shot from behind at a distance of no more than three inches; all the eye-witness testimony evidence placed Sirhan and his gun in front of Kennedy, and never closer than three feet. Simply put, the physics were impossible. A man standing a yard in front of his supposed victim cannot shoot him from behind, three inches away; which means there was a second gunman.

The ballistic evidence, too, proved the existence of a second gun being fired in the pantry. Los Angeles Police, the FBI and the LA Sheriff’s Office found – and photographed – evidence of 14 bullets or bullet holes in the walls or woodwork. Since Sirhan’s revolver held on eight bullets and several of these were recovered from the other victims that night – someone else had to have fired a weapon: 14 into eight just does not go. 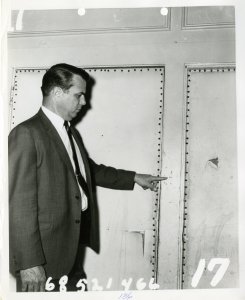 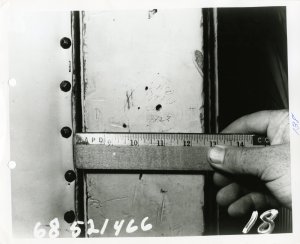 Brad also located the only recording to capture the assassination – an audio tape made by a freelance reporter called Stanislaw Pruszynski. He arranged for it to be analysed by three accredited audio experts: they found clear evidence of at least 13 shots being fired, and that some of those shots so too close together that it would have been impossible for a single gun to fire them.

The Pruszynski recording and all the ballistic, forensic and eyewitness testimony was collected by Los Angeles Police. Rather than investigate it, however, LAPD suppressed and then buried it for almost 20 years. Its records remained sealed until 1988 – which is when Brad and I separately began investigating. Those records – as well as the FBI files (also suppressed for almost two decades) are vast: 50,000 pages of LAPD documents (plus tens of thousands produced by federal investigators), hundreds of transcripts of eyewitness testimony, scores of audio and visual recordings as well as 990 photographs. In total the collection occupies 36 cubic feet at the California State Archives in Sacramento: little wonder, then reviewing, analysing and cross-referencing it took Brad and I so many years.

Today, newspapers and broadcast networks in America and Britain have carried reports on the 50th anniversary of the shooting[1]. Almost all repeat the official narrative: that Sirhan Sirhan was a lone gunman, solely responsible for the murder. Where once the commercial media would have questioned and analysed this, now it feels no requirement to do so. It is easier and cheaper to trot out the official line and then move on. Even the doubts belatedly expressed by RFK’s son and namesake, Robert Kennedy Jnr – breaking the family’s half century of silence – are either ignored or, more troublingly, publicly denounced.

Which is where the ‘C word’ comes in: the vast mountain of evidence which disproves the conventional narrative are lazily dismissed as a “conspiracy theory”. Why “lazily” ? Because this fails to make the important distinnction between conspiracies and conspiracy theories.

The latter are exercises in speculation – hypotheses drawn out from events (real or supposed). By contrast, a genuine conspiracy is, at heart, no more than an agreement between two or more people to carry out an act that is, by implication, immoral or unlawful.

And genuine conspiracies happen. Watergate was a conspiracy, as was the selling of arms to Iran to generate unauthorized funding for Nicaraguan rebels; Al Qaeda’s attacks on New York and Washington D.C. – 9/11 – were the product of a criminal conspiracy.   Whilst each of these may be still surrounded by claims and counter-claims – conspiracy theories – the facts show that the conspiracies themselves existed.

So, too, do the facts of the Robert Kennedy Assassination. Buried in the LAPD files are the details of three conspiracies reported to it in the immediate aftermath of June 5. Each was well-sourced – indeed one came from another police department; each named the alleged conspirators; each involved RFK’s sworn enemies in organised crime and the Teamster’s Union.   Our book reveals – for the first time – those alleged plots; it does so by reproducing exactly the LAPD file documents. It also shows what the police did with the information about those conspiracies: nothing.

Neither Brad nor I are “conspiracy theorists”. We are old-school, old fashioned journalists; When we began investigating we didn’t set out to prove a belief that it involved a conspiracy. Our approach was always to ascertain the facts – slowly, patiently and forensically – from documentary evidence and witness testimony, and to pursue those facts wherever they might lead.

Nor do we claim – unlike some other reporters – to have “solved” the case. Journalists don’t solve crimes: that job belongs to the police, prosecution authorities and the courts. Our role is to investigate, locate evidence – new or overlooked – and, where that shows that the historical record is wrong or deficient, to present it with a strong recommendation for the case in question to be re-opened.

Individually and in tandem, we have done our journalistic job for the past 25 years. We believe that the preponderance of evidence we (and others) have unearthed clearly indicates the presence of a second gunman in the Ambassador Hotel pantry – and that whilst Sirhan Sirhan wounded other people, an as-yet unidentified second shooter fired all the bullets that struck Bobby, one of which killed him. 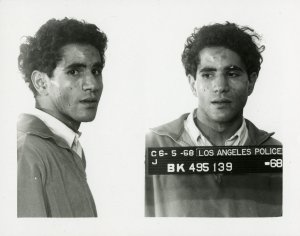 We also believe that there are strong evidential grounds for the murder to have been the result of a conspiracy. We present that evidence and show that on the balance of probabilities – the standard used by prosecutors to determine whether any investigation should be pursued – it points to Robert Kennedy’s arch-enemies: organized crime and its allies in the Central Intelligence Agency. We also reproduce documentary evidence of the involvement of each.

Does our investigation prove unequivocally that the CIA and the Mafia murdered the man who was thought by many to be on his way to the White House ? No, it does not.  But dismissing genuine investigative journalism – without bothering to check whether it has a solid evidential basis – as “a conspiracy theory” is dangerous. It abrogates the fundamental job of journalism and paves the path for its antithesis – the mushrooming of bogus ‘fake news’ websites, paranoid conspiracy theorising masquerading as real investigation, and the toxic spread ill-informed opinion over facts.

On the 50th anniversary of the shooting in the pantry – but also as the constant repetition of ‘alternative facts’ by today’s occupant of the Oval Office begins to sap the public’s ability and willingness to sift truth from lies – it is time to demand a new, honest and official enquiry into the assassination of Robert F. Kennedy.

[1] Kennedy actually died of his wounds in the early hours of June 6.