In a week when the Chancellor of the Exchequer pronounced that driving a train is so easy “even a woman” could do it, and when the announcement of a female actor as the latest Dr. Who sent some male fans into paroxysms of angst, we should be grateful to Channel 4 for broadcasting a new documentary about the time when women playing soccer was deemed so outrageous that the (all male) Football Association outlawed the female game.

The struggle by women to be “allowed” to play football is a truly remarkable piece of social history – and it goes much further back than story of the most famous team – Dick, Kerr’s Ladies – whose success between 1916 and 1921 largely brought about the events portrayed in C4’s film.

In 2013 I published a book about the secret history of women’s football: 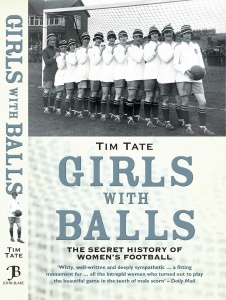 “Girls With Balls”[1] traced (amongst a great deal else) the origin of the game back to 1881: in May that year, newspapers carried reports of the the first-ever women’s matches between Scotland and England – and of the riots which ensued. The Nottinghamshire Guardian’s May 20 account was typical:

“… a few roughs broke into the enclosure, and as these were followed by hundred soon after, the players were roughly jostled and had prematurely to take refuge in the omnibus which had conveyed them to the ground. Their troubles, however, were not yet ended, for the crowd tore up the stakes and threw them at the departing vehicle and but for the presence of the police some bodily injury to the females might have occurred.”

For the next 30 years a unpleasant cycle would be repeated again and again. Women attempting to do nothing more than play a sport they loved were attacked – both physically and verbally – publicly denounced and repeatedly exploited. By whom ? By men.

Nevertheless – to borrow a disgraceful reprimand levied in February on a woman Senator by one of the most senior politicians in America – they persisted.  And by the middle years of World War One, they were needed. Hundreds of working-class women across Britain, formed teams and Leagues to played matches in aid of war charities. They raised staggeringly large sums of money and drew crowds which sometimes surpassed those of professional men’s clubs. In doing so, their fate was sealed.

In 1921 the Football Association banned women from playing matches at the grounds of any of its members clubs. It followed this by banning FA-registered referees from officiating. Inevitably the women’s game slowly withered and died.

Two books other than mine have told the remarkable story of the Dick, Kerr’s Ladies. Gail Newsham’s “In a League of Their Own” and Barbara Jacobs’ “The Dick Kerr Ladies” offer very detailed accounts of the team and its stars: I heartily commend both.

But for anyone wanting to understand the much longer struggle of women to play football, and how this  played a vital role in the fight for women’s rights, I unashamedly recommend my own book. It is both history and her-story – and the latter is a shamefully undervalued part of the story of all of us.  Yet, when even that bastion of mansplaining, The Daily Mail, publishes a review praising the book as “a fitting monument for all the intrepid women who turned out to play the beautiful game in the teeth of male scorn”, there may be hope.

Perhaps one day soon the stories of all the remarkable, brave women who battled male prejudice will make the journey from her-story to widely-known history.  And then, perhaps,  no future Chancellor of the Exchequer will so casually denigrate women, and the hiring of a female actor for an iconic role will not induce a spasm of wounded male outrage.

[1] For the paperback edition, released earlier this year, the publishers decided on the slightly less ‘challenging’ title: Women’s Football – The Secret History.