MI5 and the curious case of Michał Goleniewski 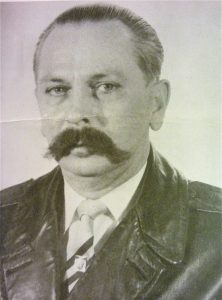 Sixty years ago the most important Cold War spy the West had ever known defected at the US Consulate in West Berlin.

Lt. Col. Michał Goleniewski was a very senior officer in the Polish Intelligence Service, who simultaneously worked for the KGB. For almost three years, under the self-chosen cover name ‘Sniper’, he had risked his life to smuggle an unprecedented haul of Soviet Bloc intelligence documents to the West; when he defected, across divided Berlin in January 1961, he provided hundreds more microfilm frames and top secret documents.

In total – according to the CIA’s assessment report – he provided details of 1,693 spies and their handlers, burrowed into western governments and intelligence services throughout Europe and the United States. After his defection and safe housing in the United States, arrests, trials and convictions of Soviet bloc spies followed in Britain, France, Sweden, Germany and Israel – though, strangely, not the United States. Each was the direct result of Goleniewski’s information; in many cases, his intelligence was the vital factor

In the UK alone, Goleniewski’s information led to the arrest of the Portland Spy Ring, which had betrayed highly sensitive Admiralty secrets to Moscow, and the capture of George Blake – the KGB’s long term mole inside the Secret Intelligence Service MI6. In April 1961, the five Portland Spies were convicted at the Old Bailey and sentenced to between 15 and 25 years in prison; the following May Blake was sent down for 42 years.

Unsurprisingly, western governments were profoundly appreciative. The CIA deemed him “one of the West’s most valuable counter intelligence sources” and “the best defector the CIA ever had”. It sponsored the first of his (bigamous) marriage ceremonies in the US, as well as a private Bill in Congress which theoretically allowed him to apply for US citizenship.

In the same period, MI5 praised “the inestimable value” of his information and placed on record its profound gratitude for his “copious” and “invaluable” services on behalf of British national security. For good measure it sent him an antique silver tankard as a token of the nation’s gratitude. 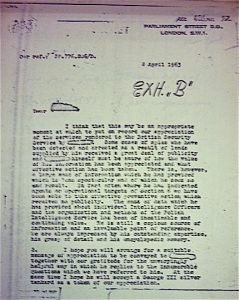 All of which makes Goleniewski’s absence from the story of the Cold War somewhat peculiar. Whilst he does crop up as a shadowy figure, tentatively referred to in accounts of the Portland spies and Blake, by and large he has been airbrushed from history. Ostensibly this is – on the rare occasions it is explained – due to his unfortunate and entirely bogus claims, beginning in 1964, to be the (long-dead) Tsarevich Alexei Romanoff, only son of Tsar Nicholas and thus heir to the Russian Imperial Throne.

Some years ago I began researching Goleniewski’s remarkable story; I wanted to discover what drove an extraordinarily brave and devastatingly effective spy for the West to become a deranged Romanoff pretender. The result is my book, The Spy Who Was Left Out in the Cold, published today by Transworld/Penguin[1]. 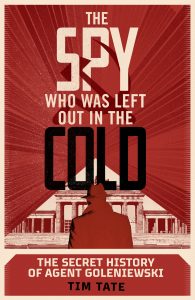 It proved to be surprisingly difficult to prise information out of the governments who had benefitted from his genuinely courageous efforts. After some Freedom of Information Act prompting, the CIA released a portion of its files; these led to other documents it had de-classified which yielded rather more (and more disturbing) records of the way the Agency handled its former star defector. These showed that it reneged on its commitments, starved him of money and plainly began harassing and discrediting him.

Unlike the CIA, MI5 is specifically insulated from Freedom of Information Act requests. Although a substantial number of its reports on Goleniewski’s information can be found in other historic de-classified files on the successful Security Service espionage cases which followed, today’s occupants of Thames House were regretfully unwilling to disclose anything further.

I wrote to MI5’s archivist asking whether it still held a file on Michał Goleniewski. To its very real credit, the Security Service responded (it is under no legal obligation to do so). It confirmed that a file on Goleniewski sits in its registry, but that “after careful consideration, we have concluded that we are unable to release it to TNA [The National Archives], due to the continuing sensitivity of the material contained within it.”

What could this “continuing sensitivity” possibly concern ? Goleniewski defected exactly 60 years ago, and the Soviet Bloc for which he worked collapsed three full decades ago. What information in his MI5 file could be current – let alone “sensitive” today ?

Speculation is generally anathema to the practice of good journalism. But in this case, documents I located in archives across the United States offer signposts to possible explanations. His own, previously unpublished letters, affidavits and detailed complaints show that he warned MI5 about a “middle-ranking” mole in its own midst: a spy, working for the KGB, who was never uncovered in a decade-long blundering internal investigation. Similarly, there is some evidence that he tried to persuade British intelligence to act against Kim Philby, months before Philby’s escape to Moscow.

Added to this, documentary evidence clearly shows that MI5 continued to consult – and pay – Goleniewski for more than a decade after the CIA abruptly severed ties with him on the basis that he had lost his mind. The Security Service was surprisingly untroubled by his entirely fraudulent claims to be Alexei Romanoff.

The continuing western secrecy surrounding the long strange case of Michał Goleniewski is all the more puzzling in the light of the release of his Polish intelligence service files – more than 1,100 pages in total. These dossiers, held at the Institute of National Remembrance in Warsaw, reveal a much more nuanced, if even more disturbing, picture of the best spy the West ever had – then lost.

It is surely a sorry state of affairs when the records of the communist Polish Intelligence Services are more available than those of our own – especially since Goleniewski was ostensibly a traitor to his homeland but, initially at least, a hero to Britain and the United States.

But unless or until Britain’s deeply unsatisfactory Freedom of Information Act is tightened, MI5’s most peculiar “sensitivity” will continue to keep secret the full story of the debt this country – and its allies – owe to Michał Goleniewski.

[1] A US edition, titled “Agent Sniper” will be published in December by St. Martin’s Press