HOW MUCH IS THAT GIRL IN THE WINDOW ?

The true – but hidden – cost of ‘legal’ prostitution in the world’s most famous Red Light District. 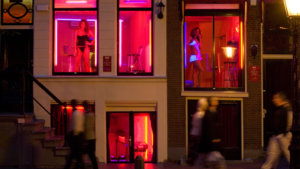 In April 2018 I received an e-mail from two young Dutch women.

Anna Hendriks and Olivia Smit[1] were then 32; they had escaped from lengthy periods of sexual slavery in Amsterdam’s Red Light District – Anna had worked in the neon-lit windows for seven years, Olivia for five – and had recently helped bring to justice the vicious pimp who forced them into prostitution, and had kept them there with violence.

Would I, these young women asked, be willing to help them tell their story ?

As a documentary maker and an author I had previously investigated Holland’s legalised prostitution industry. In 2011, my Al Jazeera series on 21st century slavery included a 30-minute film which showed that, contrary to claims that this ‘liberalisation’ helped women by ‘enabling’ them to sell their bodies willingly and safely, legalisation had, in fact, caused a significant increase in international sex trafficking of brutalised sexual slaves by organized crime gangs. (You can view the film here: https://www.youtube.com/watch?v=rmMhDRJt0ek)

Two years earlier I had helped a British woman, Sarah Forsyth, tell her story of being tricked and trafficked from the north-east of England to Holland’s Red Light Districts. The resulting book, Slave Girl, has sold more than 700,000 copies worldwide.

And yet, when I opened the email from Anna and Olivia I was initially hesitant. Not because their stories seemed improbable – they were all too horribly familiar from my previous work – nor because there was no hard evidence to support them: on the contrary, the women provided me with copies of police reports and court judgments which unequivocally bore out their account. So why the reluctance ?

Both the Al Jazeera film and the Slave Girl book had provoked a backlash from pro-prostitution supporters or campaigners. Sometimes this turned personal and very, very nasty: Sarah Forsyth was accused of inventing her entire story (despite the fact – reported in the book – that her pimp was convicted in a British court of trafficking her), and I was denounced for helping her write it.

But meeting and interviewing Anna and Olivia, and carefully studying their documentary evidence, convinced me that their story was simply too important not to tell. As they quietly and with great dignity stressed, if two young middle-class girls from ordinary families can so easily be sucked in to the industrialised conveyor belt of paid-for sex and forced by violence to sell themselves in the world’s shop window of legalized prostitution without anyone intervening, the same could – and does – happen to anyone. As Anna and Olivia put it:

No child dreams of this life. No little girl grows up with the hope of one day renting her body to dozens of men, night in, night out, allowing them to penetrate her, careless of the damage they cause. Yet for thousands – tens of thousands – of women this is what happens. Six nights a week, we were two of them.

Once upon a time we were not really any different from most of you. Or your children. Or a young girl you know. We were not sexually exploited by our families or anyone in authority over us; nor were we drug addicts, driven to sell our bodies for the price of a fix. And yet at the age of 16 we were groomed and then forced into the commercial sex trade.

When – at last – we escaped we were as different from you as it is possible to be. Sex work leaves an indelible mark on those who undertake it. Over the course of our years behind the windows what we experienced, what we endured and what we saw, changed us so fundamentally that compared to you we sometimes feel like aliens from another galaxy. 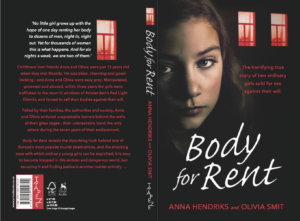 I am privileged to have been trusted by Anna and Olivia to write Body For Rent.   If it wasn’t an easy story to tell – and if it is profoundly shocking to read – that only re-enforces the years of pain, fear and abuse which these two brave young women endured for long long.

I am also very grateful to my indefatigable agent, Andrew Lownie, and to Orion Books. Both saw the importance of Anna and Olivia’s harrowing story. I hope you, as readers, find it as deeply affecting as we all do. And I hope that by telling it, the book gives pause for thought to the millions who travel to Amsterdam each year, and who view the Red Light District as harmless “fun” or “entertainment”.

It is not. It is a vastly-lucrative prison which makes fortunes for those who run it and who are willing to exploit the women held captive behind the glass windows.  Anna and Olivia were two of them. All they ask is that you listen.

[1] Because of the stigma attached to prostitution – even when it is forced – ‘Anna’ and ‘Olivia’ are pseudonyms to protect the women’s identities.